Pacers Advance in the NBA Playoffs!!!

I wanted to share this blog post from Scott Agness to the Pacers.com website.  I  found it to be a great review about a true team without a superstar. Lets hear it Indy!!! Blue and Gold!!! 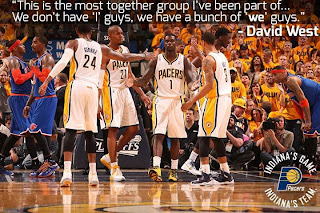 In a superstar driven league, the Pacers, who pride themselves in team basketball, are one of just four teams left standing in the NBA playoffs.
On Saturday night, we saw further indications of just how tight this group is. In the final seconds, with Sam Young as the foul line, the entire bench was standing, cheering everyone on. Coach Frank Vogel slapped hands with Paul George. George Hill and Lance Stephenson embraced at mid-court. After the game, they all gathered at the center-circle to celebrate what they had just accomplished.
Nothing was more telling than how the team handled the postgame press conference responsibilities. The head coach and at least one player from each team must go into a separate room and answer questions from the media. When it was Vogel’s turn, he sat down in a full room with both of his daughters on his lap. Family is a big aspect of this team.
Later, a player representative of the Pacers was due up. But instead of just one guy, which presumably would have been Lance Stephenson after his 25-point career night, all five starters sat down on the platform as a unit.
Together, just like family.
The decision to all come out was decided collectively. Shocked? You shouldn’t be.
“This is the most together group I’ve ever been a part of,” said David West, the eldest player on the team. “We don’t have a bunch of ‘I’ guys, we have a bunch of ‘we’ guys.”
Remember, the Pacers are doing all this without All-Star Danny Granger, who missed but five games this season with a left knee injury. George Hill, who sustained a concussion on Tuesday and was a game-time decision, did all he could to pass the league-mandated tests in order to be out there with his guys.
“This was a game I couldn’t miss, and I couldn’t wait to get out there with my teammates,” he said.
In this six game series, all five starters led the team in scoring in at least one game, and thus went to podium. (As opposed to the Knicks, who were led in scoring by Carmelo Anthony each night). This moment was special and likely one they will remember years down the road. The Pacers are a balanced bunch that when pieced together, they have the talent to compete with any team on any night.
“It was a great team effort from top to bottom,” Roy Hibbert, visibility the most-excited Pacer of the group, added.

Posted by Indiana Resource Center at 11:49 AM