Jeffersonville, IN - the Louisville connection 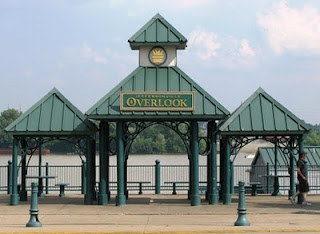 Jeffersonville is located just 2 miles NE of Lousville, KY with a population of 30,479 in the last census.

Settlement in the Jeffersonville vicinity began about 1786 with construction of Fort Finney on the riverfront near the present John F. Kennedy Bridge. In 1787 the stockade was renamed Fort Steuben in honor of Baron von Steuben, the German officer who had helped General George Washington train the Continental Army in military tactics. The fort served as a militia post until nearly 1800. Precisely when the settlement became known, as Jeffersonville is unclear, but it was probably about 1801.


In early June 1802, Jeffersonville became the county seat. The town's name honored President Jefferson, who had suggested a unique checkerboard plan for the settlement. According to Jefferson's plan, the alternate squares were to be left open for "trees and turf," thus providing a means to clear the air of diseases such as yellow fever. Jefferson's plan was altered by the addition of diagonal streets, which crossed in the open squares. This modification proved unworkable; the streets were redesigned according to the present gridiron in 1816.

A primary source of Jeffersonville's growth was the steamboat industry. In 1819 several local investors built the United States, a 700-ton vessel that could carry 3,000 bales of cotton. In 1834 James Howard launched his first steamboat, the Hyperion, at Jeffersonville. Fourteen years later, after similar ventures in Louisville and Madison, he returned to Jeffersonville to open the Howard Ship Yards. For nearly a century, the Howard family turned out the finest craft on American rivers, including the Glendy Burke, Robert E. Lee II, and Mark Twain.

Shipbuilding remains a major component in Jeffersonville's economy. But the local economy is much broader than it was a century ago, embracing such diverse products and services as kitchen cabinets, statistical processing, trucking and distribution, steel fabrication, electronic components, and a host of other enterprises located in industrial centers such as the Jeffersonville Industrial Park, America Place, and the Clark Maritime Canter.

But even as the city changes with the times, it continues to demonstrate a strong appreciation for its historic roots. The downtown commercial and river front residential areas comprise a local historic preservation district, which, along with an extensive adjoining residential neighborhood, is also listed on the National Register of Historic Places. A strong Main Street program is helping breathe new life into the central business district. And the city is engaged in a long-term river front development program designed to capitalize on Jeffersonville's historic commercial architecture and its close proximity to the Ohio River's scenic beauty and recreational opportunities.