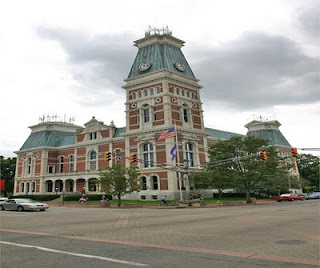 Columbus, Indiana is 41 miles south of Indianapolis and 32 miles east of Bloomington with a population of approximately 39,000 residents during the last census (2000).  The area now known as Columbus was purchased by Luke Bonesteel and General John Tipton in 1820.  It was first named Tiptonia in honor of the general.  The present name of Columbus was given to the city in March of 1821.  It was incorporated as a city in June of 1864.  The first railroad crossed through the area in 1844, which helped the community to grow rapidly.

Columbus is most famous for its art and architecture.  In 2008, National Geographic Society's Center for Sustainable Destinations ranked Columbus 11th out of 109 historic destinations WORLDWIDE, higher than any other U.S. destination.

The city is also ranked 6th in the NATION for architecctural innovation and design by the American Institute of Architecture.  Other cities in that list include Chicago, NY, San Fran, Boston and D.C - so it is in very elite company!

Geero Saarinen, the architect of the arch in St. Louis and the glass pyramids at the Louvre, designed the Columbus library.

Travel writer Jordan Simon listed Columbus, Indiana among his Top 10 Things to See in the U.S. Before You Die alongside Charleston, Grand Canyon, Yellowstone.

Get in touch with your artistic side in Columbus!!!