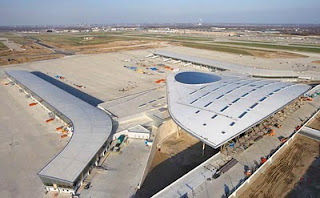 I have always been a fan of the Indianapolis Airport - even from back in the Weir Cook Airport days.  Now I have justification for bragging!!!!

Indianapolis falls into the small category.  Rankings were based on a 1,000 point scale.  The areas of greatest impact were speed of baggage return, ease of check-in and baggage check, comfort in airport terminal and the amount of time required for security check in.

Indianapolis came in FIRST PLACE in it's category with a rating of 777!!!!!!!  No surprise to me - but it gives a little backbone to all my bragging.

If you haven't been to the new and improved airport (which opened its new terminal in November of 2008) - it's worth checking out, even if you aren't catching a flight.  Bright, open, classy, classic, comfortable are just a few of the words that come to mind.  And for those of you who share my nostalgia - even though it is known as the Indianapolis International Airport - the terminal building itself is called the Weir Cook terminal with a display paying homage to its namesake.