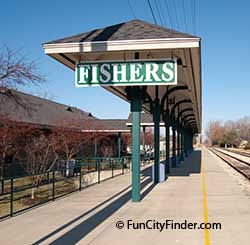 Located 20 miles north of downtown Indy, it was originally known as Fishers Switch and then Fishers Station.  Fishers came into being in 1872 when Salathiel Fisher divided his land.  It was common for communities to spring up along railroads, and Fishers was not exception, thus the early references to the train station (aka "switch").

The railroad was a natural draw for residents and businesses, the first of which was a gristmill and sawmill which was located where the Nickel Plate restaurant is today.  There is a bit of nostalgia each summer when the State Fair Train makes it journey from Fishers to the State Fairgrounds in August.

Prior to Fishers appearing on the map, William Connor was the only white man (the rest being Indians) in the entire township.  Conner operated a trading post which is now the Conner Praire Pioneer Museum, one of the nations finest living history park and museum.

A consolidated school district of Hamilton Southeastern was formed in the 60's which now boasts 10 elementaries, 2 intermediate and junior highs, a freshman campus and senior high school. 10 of the schools have a 4 star rating from the Indiana Department of Education.

The relocation of State Road 37 to the east side of town and the connection with I-69 insured the future growth of Fishers as a commercial and residential center. The town of Fishers soon became the fastest growing suburb of Indianapolis in the 90's.  At the end of 2006 population was estimated at over 60,000.

Every year hundreds of new residents begin calling Fishers home.  They are pleased with the high quality of academic education, welcoming atmosphere and being close to schoos, health care, churches, shopping and other amenities.

Recreation and leisure abound with 9 parks, 61 miles of walking paths, golf courses, pools and a new state of the art YMCA.  There are outdoor concerts during the summer at the town center and a big parade and activities around July 4th (Fishers Freedom Festival).

A great place to call home.

Posted by Indiana Resource Center at 11:50 AM