The Indy Chamber just put out their October 2014 Economic Briefing.  Since the Indy Metro area is the capital and central point of commerce for the state - it can paint a pretty good general picture.  Other market areas such as Bloomington, Lafayette, Columbus, Evansville can also provide specific data about their hyper-local economies through their own Chamber of Commerce. 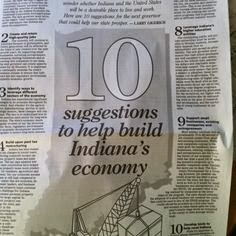 Employment:
The Unemployment rate hit the lowest rate since September of 2007!  That translates to:
5.4% for Marion County (down 1.7% from prior year)
3.8% for Hamilton County (lowest in Metro area)
5.8% for Madison County (highest in Metro area)
4.8% for Metro Indy
5.7% for State
5.9% is the current National rate

Skjodt-Barrett Foods is going to expands it's U.S. headquarters in Lebanon by adding 97 jobs by 2017.

Commercial and Industrial vacancies are down

Posted by Indiana Resource Center at 11:31 AM