I wanted to introduce you to an organization that the Relocation Department will be partnering with soon.....

By teaming up with relocation companies across the country, Move For Hunger is creating one of the nation’s largest year-round service programs.  Their movers offer to pick up the unwanted, non-perishable food items from those who are moving and deliver it to their local food banks.

As you may be aware, many people throw out a good deal of “stuff” when they move.  Unfortunately, a lot of this “stuff” is food that could be delivered to a family in need rather than thrown away.  That’s where they come in … 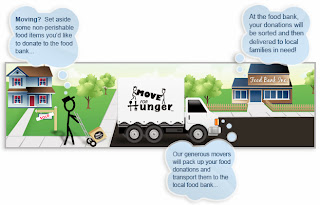 If you are moving now, in the future or know someone who is moving - we encourage you to go to their website HERE and find what local movers work with Move For Hunger in your area.  You can get a quote to move the stuff you are keeping and they will provide a box for the food to be donated.  They will pick it up and deliver it to the local food bank.  You DO NOT have to get a quote or use them as a mover.  They will still provide boxes, pick up the food and deliver it.  You may also drop it off at their offices if desired.

In 2014 - we hope to have boxes at all our offices where you can pick them up or just drop off the food you would like to donate.

We wanted to provide some awareness about hunger on a more local level also...

When most people think about hunger, they think of a starving child in a third-world country. Or perhaps they think of a long line of homeless people waiting outside an inner-city soup kitchen.
The truth is: hunger is a HUGE problem everywhere in the United States, but it’s not always easy to see. In a country known for its wealth and prosperity, 50 million Americans struggle to find their next meal.
1 out of 6 people in your life is hungry
The face of hunger has changed. No longer is it just the homeless man on the street reaching out for a helping hand, but every day millions of people are struggling to feed their families. No one is a stranger to the economic hardships of today.
Who are these millions?
They are all around us! Hunger is not limited to a single demographic or geographic region of the country. It is not a problem only affecting the homeless or the poorest of the poor. Hunger is everywhere, and the numbers are staggering.
As the economy continues to put a strain on our wallets, people are being forced to make extremely difficult decisions. What does hunger look like, you might ask?
·         It is your father-in-law who just got laid off and now struggles to pay his mortgage and put food on the table.
·         It is your elderly neighbor who must choose between buying groceries and heating her home.
·         It is your child’s classmate who goes to school each day without lunch and is too embarrassed to ask for help.
What are the effects of hunger?
Adults who suffer from hunger live shorter, less healthy, and less happy lives. They are more likely to be obese, more prone to mental illness, and more susceptible to deadly diseases. Hunger is terrible for adults, but it’s so much worse for children.
1 in 5 U.S. children go to bed hungry each night

Hunger and malnourishment go hand-in-hand, and kids who miss out on essential nutrients during their critical years of growth will be dramatically disadvantaged for the remainder of their lives. 1 in 5 American children go to bed hungry each night.
According to the Food Research and Action Center, hungry children have compromised immune systems and are two to four times as likely as nourished children to develop health problems—ranging from the relatively minor to potentially fatal. Childhood hunger also impairs cognitive development. Kids who don’t have enough to eat do worse academically, do worse socially, and risk becoming so impacted—even by only temporary food insecurity—that recovery becomes impossible.

You can even get more involved by organizing a food drive.  Move For Hunger will gladly help to provide promotional materials!  Stay tuned as we become more involved!