Give Thanks Indiana!!! Where Indiana Ranks.....

Gobble Up to the Table! 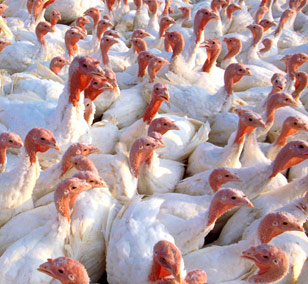 The average cost of the traditional Thanksgiving feast for 10 people this year is $43.47. This includes a menu of turkey, stuffing, sweet potatoes, rolls with butter, peas, cranberries, a relish tray of carrots and celery, pumpkin pie with whipped cream, and beverages of coffee and milk.


Indiana ranks fifth in the nation for number of turkeys expected to be produced in 2010. Indiana is responsible for around 7 percent of total U.S. production.

The value of all turkeys raised in Indiana in 2009 was $271.5 million. Indiana ranked fifth in value of turkeys raised, following Minnesota, North Carolina, Missouri and Arkansas.

There were 498 Indiana farms with turkeys in 2007. Dubois County leads the state in turkey inventory (followed by Daviess County) and is one of the top 10 turkey-producing counties in the nation.

Indiana's 2009 production of cucumbers was valued at $3.5 million. Indiana's production weighed 9,620 tons and made up 1.8 percent of the nation's total production for processing. Indiana ranked eighth among states.

There were 6.46 billion eggs Indiana produced from December 2008 through November 2009. Indiana's egg production made up 7.1 percent of the U.S. total and ranks fourth in the nation.

On average 1.5 million Hoosiers volunteered in the state Indiana between 2007 and 2009, or about 29.9 percent of all residents. Indiana volunteers contributed 206.1 million hours of service each year, or 42 volunteer hours per resident. Nationally 26.5 percent of Americans volunteered (62.0 million) over this period, contributing 8.1 billion hours of service in communities across the country.

The amount of service contributed each year in volunteer hours in Indiana is valued at $4.3 billion. In Indianapolis $1.1 billion of service was contributed by 394,500 volunteers.