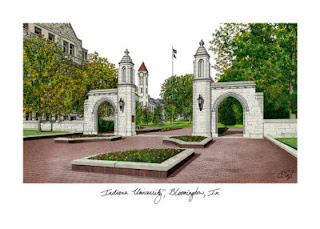 Bloomington is aobut 50 miles southwest of Indianapolis and is the county seat of Monroe County.  It was incorporated as a city in 1818 and got it's start as the selected site for Indiana Seminary by President James Munroe.  The seminary later became a college and in 1848 it became Indiana University as it is known today.

Bloomington is a vibrant city and enjoys some unique landscaping. It is an area of irregular limestone terrain characterized by sinks, ravines, fissures, underground streams, active steam vents, and caverns. It is situated in the rolling hills of southern Indiana.   The city was the site of the Academy Award-winning movie Breaking Away, featuring a reenactment of Indiana University's annual Little 500 bicycle race. Bloomington is also famous for its rock quarries, also featured in Breaking Away, which residents have been known to use as swimming holes.

Indiana University is the flagship campus of the IU system. The campus sits on 1,933 acres including lush landscape and historic buildings. The university offers more than 900 degree programs and majors over 10 academic divisions. IU sports teams are nicknames Hoosers and boast over 20 national championship teams. The IU sports teams have won or shared over 155 Big Ten Conference championships. The Bloomington campus enrolls around 40,000 students each year.

Major employers include of course Indiana University along with Cook Group, GE and Otis Elevator.

Bloomington is home to the state's only national forest, Hoosier National Forest, offering over 230 miles of hiking and riding trails.

Lake Monroe is a popular venue for boating, fishing, water-skiing and more.  In fact, I have memories of learning to water ski on Lake Monroe when I was in high school.  I probably still have some of the water in my lungs.


Posted by Indiana Resource Center at 10:14 AM